Take a moment and recall the last time you were at “the top of your game.” A time when you were in the flow, in the zone, running on all cylinders, making it happen. 2. Then on a piece of paper, write down one or two words or short phrases that describe your internal experience whenever you are at the top of your game. Make a list of five to ten qualities or more if you discover more. But five will be sufficient. Post it where you can see it, read it often. The more you perform this simple exercise, the more you will be rewiring your brain to generate the higher brain function that can keep you at the top of your game. It is called neuroplasticity. Neuroplasticity allows the mind and brain to work together to provide the brain power to attain what we want from life, which for most of us is success, health and love.

Neuroplasticity can rewire you, your team and your company from brains that are stressed, dampened and generating limited success to brains that flow with the creative intelligence and positive emotion, turning effort into the joy of excelling. Businesses that tap the power of neuroplasticity will eventually overwhelm the competition. It is the new competitive edge.

Generating this change is simpler than you might think and results accrue faster than you might imagine. It only took eight weeks for researchers at the University of Wisconsin to rewire the beleaguered brains of a project team that 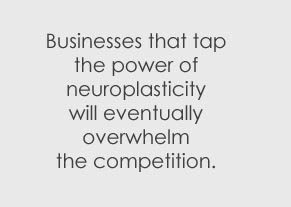 was stressed and failing. A simple mindfulness-based approach practiced for those eight-weeks produced brain scans indicating the level of higher brain function that can sustain peak performance(Davidson, Kabat-Zinn, 2003).  Ten weeks of mindfulness practice can rewire the brain to free people from obsessive compulsive disorder (Schwartz, 1995).  Eight weeks of a cognitive behavior program can rewire depression away (Segal, Mayberg, 2002). These are serious brain disorders. If it can solve these disorders, just think how effective it can be in ridding the brain of toxic stress hormones that derail higher brain function. Neuroplasticity is not mere stress reduction; it is the stress solution.

A neuroscientist at Harvard found neuroplasticity can even teach you to play the piano without using a piano. He had people simply think about practicing a five-finger piano exercise. They played the simple piece over and over in their minds, keeping their fingers still, simply imagining how their fingers would move if actually playing the piano. The subjects practiced two hours every day for five days. At the end of five days he measured the motor cortex of these people. The results were astonishing. The area of motor cortex had expanded in the imaginary players in the same way it had in subjects who had actually played a real piano.The mind can change the brain and that very fact can change a life or an entire company in every way that matters.

The keys to success health and happiness